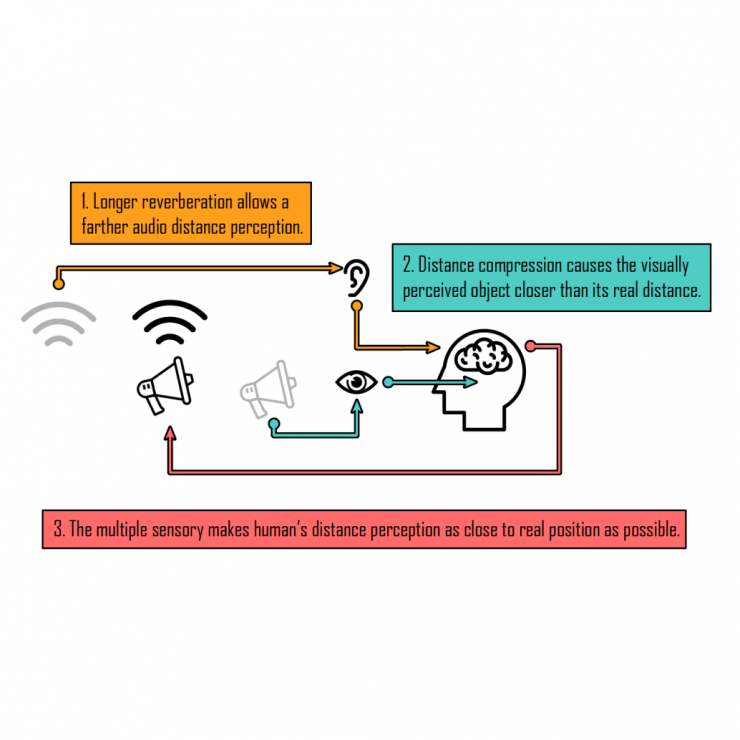 Virtual Reality (VR) technologies are increasingly being applied to various contexts like those gaming, therapy, training, and education. Several of these applications require high degrees of accuracy in spatial and depth perception. Contemporary VR experiences continue to be confronted by the issue of distance compression wherein people systematically underestimate distances in the virtual world, leading to impoverished experiences. Consequently, a number of studies have focused on extensively understanding and exploring factors that influence this phenomenon to address the challenges it poses. Inspired by previous work that has sought to compensate distance compression effects in VR, we examined the potential of manipulating an auditory stimulus’ reverberation time (RT) to alter how users perceive depth. To this end, we conducted a two action forced choice study in which participants repeatedly made relative depth judgements between a pair of scenes featuring a virtual character placed at different distances with varying RTs. Results revealed that RT influences how users perceive depth with this influence being more pronounced in the near field. We found that users tend to associate longer RTs with farther distances and vice versa, indicating the potential to alter RT towards compensating distance underestimation in VR. However, it must be noted that excessively increasing RT (especially in the near field) could come at the cost of sensory segregation, wherein users are unable to unify visual and auditory sensory stimuli in their perceptions of depth. Researchers must hence strive to find the optimal amount of RT to add to a stimulus to ensure seamless virtual experiences.