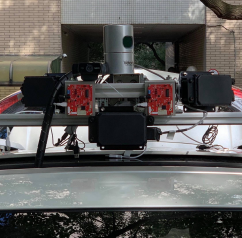 While automotive radars are widely used in most assisted and autonomous driving systems, only a few works were proposed to tackle the calibration problems of automotive radars with other perception sensors. One of the key calibration challenges of automotive planar radars with other sensors is the missing elevation angle in 3D space. In this paper, extrinsic calibration is accomplished based on the observation that the radar cross section (RCS) measurements have different value distributions across radar’s vertical field of view. An approach to accurately and efficiently estimate the time delay between radars and LiDARs based on spatial-temporal relationships of calibration target positions is proposed. In addition, a localization method for calibration target detection and localization in pre-built maps is proposed to tackle insufficient LiDAR measurements on calibration targets. The experimental results show the feasibility and effectiveness of the proposed Radar-LiDAR extrinsic and temporal calibration approaches.